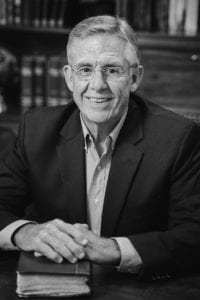 Ken and his wife, Sher, both grew up in Michigan. They were married in 1970 when Ken graduated from Alma College. Ken then attended Dallas Theological Seminary (Th.M., 1975), and studied toward the Th.D until 1979. He pastored Grace Bible Church in Southgate, MI, then moved to Jacksonville and began serving as Pastor of Westside Chapel in 1989. He completed his dissertation and received the Doctor of Theology degree in 2004. Ken’s greatest joy is being a shepherd of God’s flock and teaching the Word of God verse-by-verse. Since 2005, he has conducted over 50 conferences for pastors on expository preaching in El Salvador and Cameroon. Ken and Sher have three children and have been blessed with seven grandchildren.

Your ticket for the: Dr. Ken Mitchell